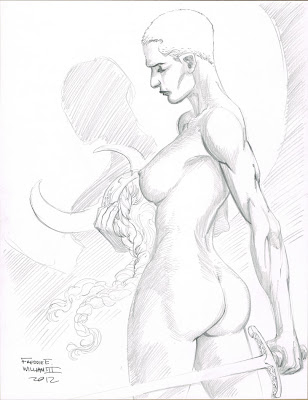 Sif was a Norse warrior dedicated to Gaia herself and it was inevitable that she would become the lover of Gaia's son, Thor. Due to her relationship with Thor, Loki and Sif developed a strange relationship. Loki respected her more than the other members of the Norse pantheon and yet berated her constantly for choosing his brother as a mate. Loki was not an intelligent man but he had a quick wit and an ability to see through the lies and bravado of others, he could see what kind of person they truly were. Loki was also a proud and honorable God, something that put him at odds with the other Asgardians. Although the Asgardians were brave and fearless warriors, they had no code of conduct or honor toward their enemies. When met with an enemy the Asgardians could be incredibly cruel and destructive. Cowards and weaklings that stood in their path could be killed instantly, or tortured and raped for weeks, depending on the mood and the spirit of the battle. Loki found their cruelty contemptuous and petty. In the night of infamy that would become known as the Lokasenna, the Asgardians had just fought against the Gods of Olympus and won a great victory. They had wiped out the Greek's centaurs, chasing them down in their chariots and murdering them in cold blood. Although the Greeks had offended the Asgardians, Loki found the genocide of an entire species to be a disgusting way to retaliate for what was a small insult. That night they drank the Golden Ambrosia, a magical wine made from the golden apples of Asgard and the Ambrosia of the Greeks. It was served in crystal glasses that took centuries to form in the realm of the Ice Giants. Loki was in a foul mood and after two days of revelry he could tolerate no more of their loud, boisterous behavior. The party was hosted by Gymir, a Sea God and it was his liquid servants who served the Asgardians. It was simply too dangerous for flesh and blood creatures to be in the presence of the Aesir during such events. Thor could not attend so Sif attended the event with her half-brother Bragi and his wife Iounn. Sif did not know Loki had arranged it so that he would arrive at the same time and could serve as Sif's date for the three day celebration. To say the Asgardians would engage in debauchery and adultery at these events would be an understatement. The Vanir and elves had also sent emissaries to attend, often for no reason other than to drink and breed with the Aesir.
Posted by Richard Evans at 6:49 AM 1 comment: 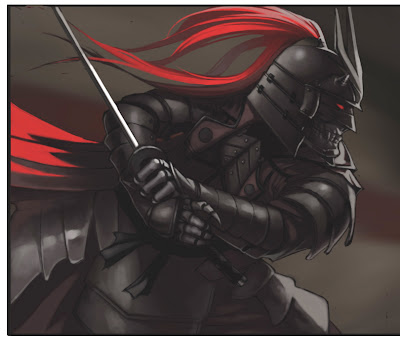 There was a period of Japanese history long ago that was never recorded, a dark time when the island of Japan was ruled by demons. A powerful God-Devil named The Infernal One blazed a burning trail across the Empire, leaving nothing but ash and death in his wake. The villagers of Mount Chokai, seeing the destruction across the land and fearing The Infernal One would destroy the mountains themselves, decided to fight back. It is believed that the people of Mount Chokai fought so valiantly, so bravely to protect the mountains, that the Earth itself decided to act on their behalf. The greatest fighter of their village was resurrected as the Ghost Samurai, a spirit with a heart of ice cold enough to freeze the Infernal One with his touch. For centuries the Ghost Samurai travelled the land, slaying the Oni Fire Demons until eventually destroying the Infernal One himself. Japan was returned to normal and history forgot about the Ghost Samurai and the people of Mount Chokai.

Ghost Samurai is undead, which means he does not feel pain or suffer any of the afflictions of the living, such as pain, fatigue or hunger. He also radiates an aura of cold that will freeze skin on contact, lower the temperature of his surroundings and extinguish fires, both natural and supernatural. In a country built primarily of wood and rice paper, the value of this ability to the Japanese people is tremendous.
Posted by Richard Evans at 6:06 AM No comments:


Posted by Richard Evans at 8:20 AM No comments:

Both books are available through the site, check them out! High quality superhero action at a price comparable to what other (guys) are selling their smaller black and white comics for!
28 pages plus bonus material, support indy heroes and check out the Legion!

http://graphicly.com/raven-entertainment-studio/legion-unleashed
Posted by Richard Evans at 8:09 AM No comments: 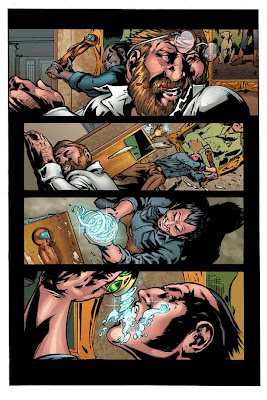 Professor Alexandre Kronosh was a renowned historian and collector of rare artifacts before becoming the first King Kronosh the Conqueror, as he liked to call himself. His career was often overshadowed by his ambitious friend and co-worker Professor Barton Hollinger-Smith, who had discovered the Chalice of Delphi. It was after drinking the perpetually refilling waters of the Chalice that Alexandre had his vision of the future. In the vision Alexandre met a future version of himself. This Future Kronosh was the enemy of the Canadian Legion and had been defeated by them many times. Future Kronosh was also the wielder of a powerful artifact called The Sceptre of Time's Shadow. The Sceptre gave Future Kronosh great power, but not enough to defeat the Legion. He believed if he travelled back in time and gave the Sceptre to his younger self, he would be able to defeat the Legion early on, thus sparing himself some rather embarassing defeats.

Young Kronosh had a different idea. He had no interest in going head to head with the superheroes once he knew he couldn't defeat them. Alexandre turned away from his older self, rejecting his offer and returning to his own time. The older Kronosh was forced to return to the Fortress Between Seconds, an alternate dimension that served as a nexus of power for those in possession of the Sceptre.

The Sceptre was previously in the care of the wizard Abraxas Ro who died in the year 1900.

Powers and Abilities
Kronosh was able to gain certain visions of the future by drinking the water from the Chalice of Delphi. The older version of Kronosh from Earth-O gained possession of the Sceptre of Time's Shadow. The Sceptre allowed Kronosh to travel between the past, the future and the strange dimension known as Fortress Between Seconds, a place where time does not exist. It also allowed Kronosh to summon things from the past, soldiers from WWII and dinosaurs that would serve him, for example. Whether or not the younger Alexandre will come into possession of the Sceptre remains to be seen.

Posted by Richard Evans at 8:05 AM No comments: 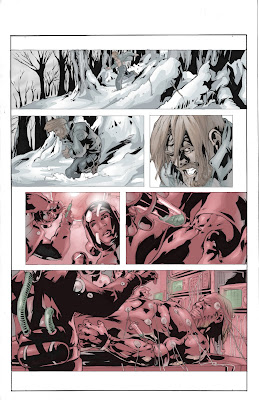 ""What the hell happened down there Captain?"
"One of our military experiments broke lose sir. The Army is currently in pursuit but it is a . . . delicate situation."
"When you say experiment, are you talking about a machine or a person, Captain?"
Ït . . well it is a HE, sir. A homeless . ."
"Say it, Captain. Say this is a person we're after here."
"It is a person. We're doing all we can to locate them but. . "
"Let me get this straight. See, I've got the file in front of me but I need you to reiterate and clarify some of this information for me, Captain. I mean, to ME it appears as if you and your people down there are incredibly stupid. You grabbed a homeless truck driver, gave him an experimental concoction full of artificial adrenaline, animal steroids and radical DNA-altering nanites. Then you lost him. Now you couldn't possibly be THAT stupid, could you?"
"The nurse at the hospital used the wrong amount of . . ."
No. That's now where the mistake happened. Why in the world would you use a homeless nobody? Why not a soldier, who we can track, train or control? Why would you pick someone with no home, no family, no ties to civilization and give him something THIS dangerous? Why not just leave a GOD DAMN NUKE AT THE TRAILER PARK YOU STUPID SONS OF BITCHES!!"
"Sir we're doing everything we can to contain. . ."
"Fine. Look, how much power are we talking about here? File says increased strength and durability. How strong is he going to get, how big of a bullet are we going to need here?"
"Well we never actually obtained a maximum increase in muscle mass and physical power in our animal tests. The animals were put down the minute they were enraged and became dangerous."
"Are you telling me the madder this thing gets, the stronger it becomes?"
"Yes sir."
"Like that old TV show? What's this guy's name, Bill Bixby?"
"No sir. It's Brian Cockrane I believe."
"That was a joke, Captain."
"I am sorry but I don't see the humor in the situation, sir. Now is not really the time to be laughing."
"That's because you aren't the one that has to send his men out in front of this thing. I'll be in touch. King of Clocks out." 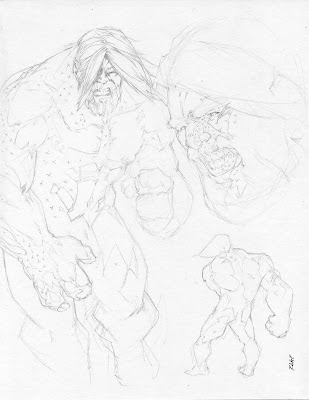 Posted by Richard Evans at 2:52 PM No comments: 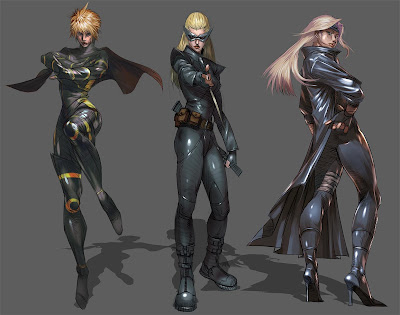 At 15 Melissa discovered she was gifted with the ability to sing. Ten years ago there were no 'idol' shows but that didn't stop her from becoming an overnight sensation. Britney, Christina, and Jessica were just making their appearance, Melissa was going to be the first, the biggest, the most popular pop singer to ever come out of Canada. She performed live on MuchMusic and TRL, with crowds so massive the downtown areas were shut down. The day before her 18th birthday, Melissa started her multi-million dollar world tour in Sao Paulo, Brazil.


The crowd was half a million people strong and the heat was making them rebellious. As Melissa took the stage they surged foward, crushing the front row against the stage.
Two songs in and people were beginning to riot. Melissa watched as fights broke out in the crowd and by the fourth song they had burned down a number of kiosks set up around the stadium. A bottle struck the drummer, forcing the band to stop performing. Melissa felt as if her brain was on fire. As she started performing her hit song Rock Candy Princess, the crowd went berserk. Her agents rushed to pull her off the stage but she was petrified. The fire in her brain was almost audible in her ears. A girl in the front row dressed just like her was being sexually assaulted by three boys, people were fighting all over, throwing things at the stage and destroying everything. She couldn't take it. Grabbing the microphone she screamed to the crowd to stop it. Stop it. Three times she said it and 500,000 plus people suddenly stopped in their tracks, unable to resist the power in her voice. When she spoke, everyone who heard her was forced to obey.The very next morning on her 18th birthday Melissa joined the Canadian Armed Forces. On completing her basic training she was asked to join the CSIS. Now as one of their top ranking agents, Melissa has been chosen to lead the government sponsored Alpha team known as the Legion. Who better to manage the world's first superheroes than a woman whose commands cannot be ignored?

Posted by Richard Evans at 8:59 AM No comments: